Messi and Ronaldo could go head-to-head

– UEFA Champions League will return to the screens in August

The stage is set and Cristiano Ronaldo and Lionel Messi could face-off in the Champions League if their respective teams Juventus and Barcelona reach the semifinals.

UEFA who are in charge of the prestigious competition have on Friday, July 10, announced the quarterfinals and semifinals’ fixtures for this year’s championship.

Manchester City or Real Madrid will face the winner of the tie between Juventus and Lyon in the quarterfinal game.

Pep Guardiola and his wards already have an edge over Real Madrid having won the first leg in Spain when these two giants first met.

Chelsea on their own path already have a herculean task in their quest to defeat Bayern Munich in the return leg after the German side embarrassed the Blues at Stamford Bridge 3-0.

The pairing was made in such a way that should Juventus and Barcelona reach the semis, both teams will face-off which will stage Ronaldo and Messi on the pitch. 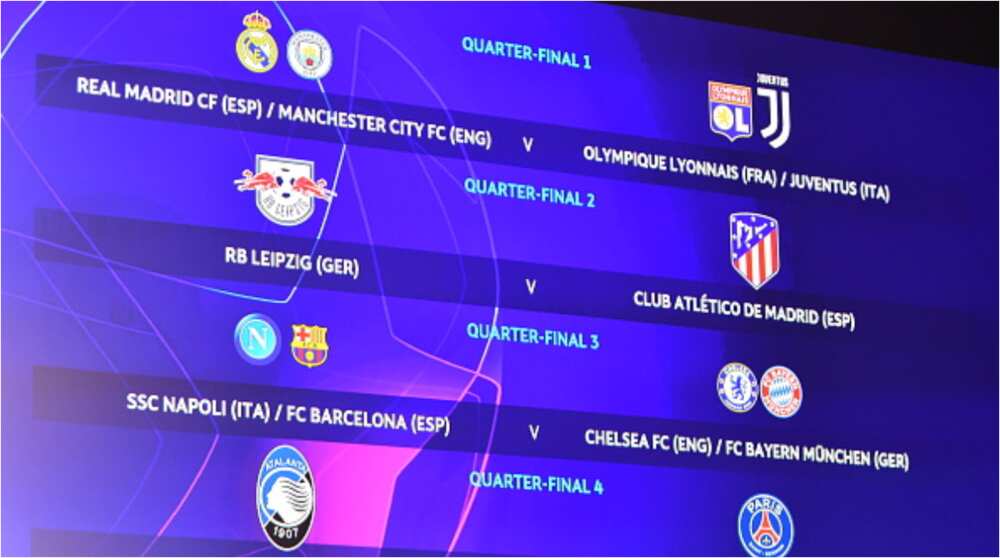 Ligue 1 giants Paris Saint Germain will be having a relatively easier route to the finals and their club president Nasser Al-Khelaifi is expecting a ‘very interesting clash with Atalanta’ in the Champions League quarter-final.

The French champions will face the winner of Atletico Madrid vs RB Leipzig cracker in the semis, if they overcome their Italian opponents.

“This is the chance for PSG to get their first title. Easy draw for them and could win this tournament if played with their strengths,” Samudra Joshi wrote on Twitter.

“Wouldn’t ever dare count Atlético Madrid out of the Champions League but PSG have quite a direct route to the final. Don’t have to play Messi, Ronaldo, or any current league champions (Man City, Bayern) until the final itself,” another wrote.

“Bayern will be eliminated by Barcelona guess what Barcelona will then face psg And we will witness Lionel Messi vs Neymar in the champions league luckily Lionel Messi will reach the final and meet Cristiano Ronaldo in the final and we gonna end this debate,” Asunya added.

Ronaldo and Messi have ruled the world of football in the past decade and the pair are not slowing down any moment.

But 1970 World Cup winner Tostao thinks otherwise claiming the Portuguese and the Argentine stars can not compare to his former teammate quite yet.

Premier League week three schedule: which teams will be battling it out?